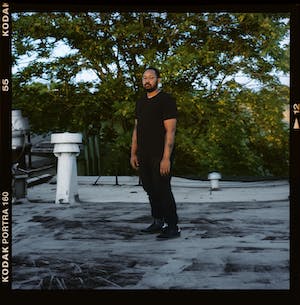 iCal
Google
Another EPIC artist about to explode ...

The UK-born, Oklahoma-raised, and DC-residing force now known as Bartees Strange learned discipline and creativity at the same time. It’s led to many varying musical endeavours over the years, including the post-hardcore band he helped found Stay Inside, working as a producer and guitarist for Lizzie No and taking the stage with genre defying acts like Melanie Charles. But despite all of that, Bartees has created his own artistic identity shown in his upcoming album and divergent live performances. Songs by Bartees have landed him in publications like Billboard, Afropunk, WXPN, Bluegrass Situation and Brooklyn Vegan.

Bartees started his career early playing in bands across Oklahoma and eventually made his way to the east coast where he played in numerous bands on keys, bass, guitar and as a vocalist across Brooklyn and NYC. The connections made playing in New York are what fuel many of his creative projects. “Making music is always a family affair - the folks that i grinded with in DC and New York are my musical backbone. When i eat they eat and vice versa. That’s how we all come up together, and that approach makes the music good.”

“Bartees uses his songwriting to explore the black experience, with a special focus on the places he grew up in the UK, East Coast and rural south. His work is intensely personal with the societal and historical, creating music that blends genres into intimate and sweeping commentary, and it’s a testament to Bartees sound that such a balance can be achieved. The main emotion of this style is a deformed nostalgia, a kind of wistful sense of heartbreak that shifts momentarily into anger or despair without warning.” - Various Small Flames