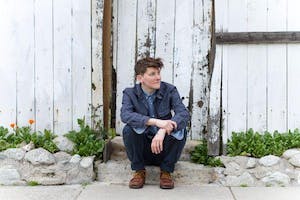 iCal
Google
Chris Pureka is back!

It’s rare for an artist to bridge the divide between critical acclaim and dedicated fan engagement. Chris Pureka is a Portland-based singer-songwriter whose body of work has resonated deeply with these seemingly disparate milieus. Her bold vulnerability in processing the intimacies of her life in song has long appealed to those listeners who crave authenticity. Now, five years coming, she shares with us another powerful entry in her life’s work, her sixth release, the aptly titled, Back in the Ring.

Chris’s elegant emotionality as a vocalist, and her flair and immediacy as a lyricist have garnered her favorable comparisons to Gillian Welch, Ryan Adams, Bruce Springsteen, and Patty Griffin. She’s earned accolades from such distinguished taste-making outlets as The New York Times, Paste, Magnet, Billboard.com, and The AllMusic Guide. She’s shared the stage with such diverse and esteemed artists as Dar Williams, The Lumineers, The Cowboy Junkies, Gregory Alan Isakov, Martin Sexton, and Ani DiFranco. Along the way, Chris has remained fiercely independent, selling nearly 50,000 albums through her own label, Sad Rabbit Records.

Chris’s journey in music mirrors her path toward self-discovery. At 16, writing songs became a way of journaling. “I was shy and introverted, and songwriting was a very personal process. I never had any intention of performing,” she shares. Post high school, she went on to complete a biology degree at Wesleyan University, and afterwards, worked in a microbiology research lab at Smith College. Meanwhile, she established a music career parallel to her biology work through touring and issuing a clutch of well-received indie releases. In 2006, when Chris found herself turning down too many opportunities as a musician, she shifted her priorities to become a full-time artist.

Her latest album, Back in the Ring, is Chris’s first studio full length since 2010’s critically acclaimed How I Learned to See in the Dark. “I’m not interested in releasing songs I can’t get behind or records I don’t love,” she says of the five-year span between albums. The title of her latest playfully suggests something of an artistic comeback, but it also references the album’s themes of relationship conflict and making the decision to fight back against dark inner demons.

“My music is the outward expression of the work I’m doing internally. What I do comes from my experiences, and I strive to express these experiences authentically. Speaking my truth, and being myself, is the way that I connect with people,” Chris confides. Her rise as an esteemed artist with captivating emotional integrity has been organic and always on her own terms. For someone who never had an intention of being a professional musician, it’s been a life of far-reaching changes and unexpected rewards.

The Harmaleighs honestly craft poetic, passionate, and powerful songs cut from a pastiche of indie, folk, pop and Americana. In January 2015, The Harmaleighs—Haley Grant [lead vocals, guitar] and Kaylee Jasperson [bass, harmonies]—embarked on something of a modern odyssey in support of their independent full-length debut, Pretty Picture, Dirty Brush. The band-mates and partners got rid of their Nashville apartment, put everything they owned in a storage unit, bought a van, equipped it with a bed, and hit the road with their 8-month-old pug Gus sleeping on the dash for the next nine months. The trials, tribulations, and triumphs of this trek would ultimately inspire their EP, Hiraeth.

“Hiraeth is a Welsh word that we stumbled upon while we were on tour,” says Kaylee. “It basically means, ‘Longing for a home.’ It’s a feeling of rootlessness and homesickness that we started to collectively feel around month six. By the end, we had burned out.”

“Even when we visited Nashville, we would be staying in a Walmart parking lot,” sighs Haley. “That’s where the whole concept came from. It’s the basis for this body of work.”

The lead track from the EP is the ethereal “Birds Of A Feather”, which is out now via all digital outlets. “I wrote the song about a friend who was going through a tough time with a relationship ending,” says Haley. “She was explaining to me what exactly was happening and said 'I'm just convenient for her.' That specific sentence stuck in my head for a couple weeks and sparked the idea for the entire song.”

The Harmaleighs’ debut LP Pretty Picture, Dirty Brush received accolades from American Songwriter, Songwriter UK and more and Spotify featured “I Keep Ticking On” on its coveted Folk Pop playlist, amassing millions of streams and counting. The duo spent the bulk of 2016 “working regular jobs and saving up money” for their next musical chapter. They hit the studio with producer Paul Moak [Mat Kearney, Caitlyn Smith] and recorded the six songs on Hiraeth in just one week. As a result of the previous two years, their signature “Indie Americana” sound further solidified.

​“Our last record was very folk-pop,” says Kaylee. “At that point, we were going through transitions and really trying to figure out what we wanted to be. When we finished that marathon tour and regrouped, we got the chance to decide who we are as a band. We wanted to utilize more electric instruments and go more indie pop with storytelling at the core. All of Paul’s productions are different. That was the allure of working with him. He helped us step up and define our style. This is really the first time we’re being true to ourselves.”

On “Lady Brain”, delicate electric guitars entwine with Haley’s hypnotic and heavenly delivery before crashing into an unforgettable refrain. “I was watching Orange is The New Black, and in one scene the main character Piper says, ‘Well, I’m going to use my lady brain and think really hard,’” Haley recalls. “I thought it was so fucking funny. I kept it in the back of my head. It’s a bit of a sarcastic song.”

Then, there’s “Mouthful of Cigarettes” which twists and turns through a bluesy lead line until eventually culminating on a powerful proclamation, “I am a fire without any wood.”

“I was sitting at a bar in Portland on month six of our tour,” Haley continues. “There was an ashtray full of cigarettes, and I was having this moral dilemma in my head. I thought, ‘What if I put all of that in my mouth and swallow the burning cigarettes because there are flames and maybe I won’t be burning out anymore?’ I thought it might spark the flame again.”