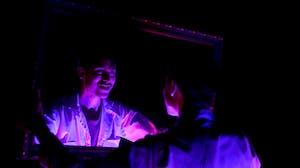 No One Mind, Humanize

For eight years, Derek Torres performed as the pop outfit T0W3RS. Worn out from industry grind and the political climate, he took a hiatus to become an activist and co-filmmaker with his wife Julianna Villarosa.

He is back with his new project Sengoko. As a multi-racial kid raised by a single white mother, Derek has always struggled with his racial identity. For most of his life, he was told his Japanese surname was Sengoko, which turned out to be a mispronunciation of his real surname Sengoku. Like T0W3RS (Torres) before, Sengoko represents his conflict to find identity.

Recently intent on marrying his love of film and music, he set out to make a fictional film soundtrack. As a latchkey kid of the VHS age, the films of the eighties introduced him to pop and electronic music. What would it sound like if John Hughes and John Carpenter had collaborated?

Sengoko + The Saline Dreams is a teenage love story set in an eighties post apocalyptic vision. Youth in a world on the brink of collapse looking for hope.